The sun finally broke through the clouds in Haiti’s capital on Friday, puddles glistening under its rays on streets filled with the sound of schoolchildren singing, the roar of moto-taxis and the lilt of market women calling to one another in Creole, Haiti’s poetic local language.

Haiti needed some relief, and not just because of its out-of-season rains. February is an auspicious month here, and this year – on 7 February – the nation was to mark the 30th anniversary of the fall of the 29-year Duvalier family dictatorship with the inauguration of a newly elected president. The ascension was to be the fruit of a three-part election cycle that began last summer, an endeavour that the United States spent $30m supporting.

Things didn’t work out quite that way. The first round of legislative elections in August were marked by such a high degree of violence and fraud that they had to be cancelled in several areas, yet were signed off by the international community. The second round, held in October, made it to the end of the day, but immediately erupted in controversy when it was announced that President Michel Martelly’s chosen executive successor, Jovenel Moïse, known as Neg Bannan (Banana Man), had finished first. In second place and heading to a runoff against Moïse was former government official
Jude Célestin, whom Martelly had defeated in his own race for office five years ago.

Opposition parties and local electoral observers cried fraud, with many local commentators pointing out that the international community backing the elections had remained largely silent as Martelly had ruled by decree after failing to hold any elections in the previous years of his government.

“Suddenly the international community says an elected president has to replace an elected president. But they didn’t have that position when they closed the parliament or when they replaced 144 mayors,” said Jean-Max Bellerive, who was prime minister under Martelly’s predecessor, René Préval. “They accepted the destruction of the whole structure of our democracy.”

The dispute led to an ever-more chaotic series of street demonstrations by those who support Moïse’s PHTK party and their opponents: at a demonstration in January, some opposition supporters chanted “Netwaye zam nou” (“We are cleaning our guns”), while at another, a protester told an AFP reporter that demonstrators would have “machetes and stones” in hand to prevent the holding of the presidential runoff on 24 January. Armed men claiming to be members of Haiti’s disbanded army paraded through the capital, pointing their weapons at civilians (one of their number was beaten to death by anti-government protesters in unclear circumstances). The electoral council – which has the task of overseeing the elections and is now accused of rigging them – fell apart and the elections were cancelled.

To make things even more surreal, the date for the transition this year fell during carnival, and Martelly, a former star of Haiti’s sinuous compas music, performing as Sweet Micky, chose it as the moment to release a sexually suggestive carnival song viciously mocking his critics and alluding to Moïse, titled Bal bannann nan (Give Her the Banana).

Hours before Martelly’s term was to end, he cut a deal with Haiti’s parliament, allowing his prime minister, Evans Paul, to take care of the day-to-day business of government after the end of the former’s term, and a provisional president to be voted into office and installed this weekend. The provisional president will govern until presidential and legislative elections are held on 24 April and a new president is sworn in on 14 May.

Following the announcement of the deal, a group of opposition presidential candidates, known collectively as the G8, issued a press release calling the accord “a parliamentary coup” and saying they would not support it. Members of Haiti’s parliament – elected in this same round of disputed elections – saw things differently.

“We reached an accord with Martelly that avoided civil war and chaos, and we’re continuing to work to elect a provisional president,” said senator Jean Baptiste Bien Aimé, a senator from the Fanmi Lavalas party of former president Jean-Bertrand Aristide, and part of the bicameral commission tasked with selecting a provisional president.

A few hundred protesters gathered last week in front of the church where Aristide preached in the slum of La Saline. Under a drizzling rain that turned the downtown streets into slippery paths of grey mud, they chanted, drank tafia (raw rum) and waved photos of Aristide before embarking on a brief march.

“We continue our demonstrations to tell the government that we need a real negotiation,” said Arnel Bélizaire, a former deputy in Haiti’s lower house of parliament and current senate candidate, known for marching with an M4 assault rifle dangling from a strap around his neck, which he had apparently left at home. “We’ve been doing this since 1986 and the people are still suffering. What parliament has done is completely illegal.”

As Haiti’s politicians debate, beyond the capital the country is facing its worst food insecurity in 15 years, partly from a prolonged drought. The gourde, Haiti’s currency, has also dramatically depreciated.

Many argue, though, that in a country marked by almost total political impunity, where politicians accused of grievous crimes continue to recycle themselves in various guises, the mere holding of elections is just a cosmetic salve to a deeper and more structural malaise.

“It’s not just personalities,” said Sylvie Bajeux, one of Haiti’s leading human rights advocates and whose organisation, the Centre Oecuménique des Droits de l’Homme, was part of a group of civilian observers of the election. “It’s the entire system. A rotten system.”
Posted by Michael Deibert at 11:03 AM No comments: 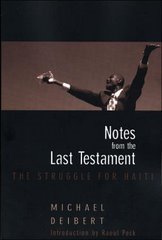